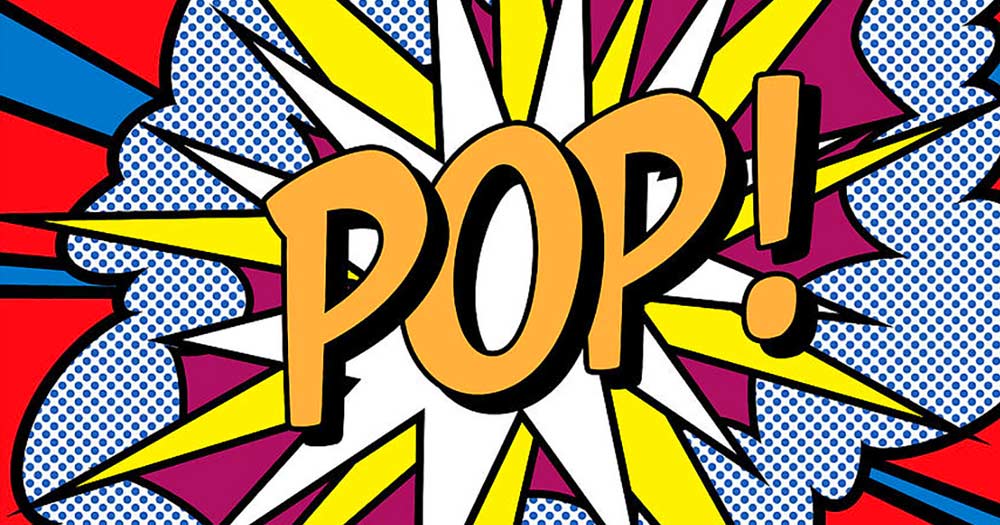 Born in Britain and exported first to the USA then the rest of the world, 'Pop Art' marked a radical change in the way art interacted with society - Things would never be the same again.

Once the Pop Art movement has spread to the United States, artists like Andy Warhol and Roy Lichtenstein would contribute to this “found art” movement, producing works that were often wholly derived from existing works, or which were painted representations of photographs depicted elements of mass media.

The American style of pop art tended to have a flare for the dramatic, while the British style was more humorous and subtle, because Americans tended to be bombarded by mass media and commercialism much more prominently, and so art that derived from this media needed to be that much more exaggerated to have an effect.

The pop art movement was important because it represented a shift in what artists considered to be important source material.

It was a movement which sought to connect fine art with the masses and involved using imagery that ordinary people could recognize and relate to.

Warhol's famous soup cans are a prominent example of this focus on the mundane and everyday, and in fact Warhol himself claimed that he painted them because Campbell's soup is what he usually would have for lunch.

One of the main characteristics that distinguishes pop art from other art movements is this focus on derived work.

Many of Warhol's paintings for example were nearly exact replicas of existing advertisements, and some were silk screen printings of photographs that had been taken by others.

Roy Lichtenstein's work consisted almost entirely of slightly-altered copies of the original artwork of others, from his comic book panels to his re-interpretations of famous works of fine art.

The pop art stays relevant today because its parody of consumerism still resonates.

The video below on one of America's most famous pop artist, Robert Rauschenberg gives a great overview of the people involved in the movement.

The 'Related videos' section below features a selection of videos on the subject of pop art. We have also included Australian art critic Robert Hughes's doco 'The shock of the new new' for context.

Our feature move this week (Below) is a 2019 version of Fritz Langs futuristic classic 1927 movie 'Metropolis'. The movie explores many of the themes found in pop art.

This Video Has Linked Article

The Video above has an associated News Article. To go to that linked Article, please Click the button below

This classic cult pop-art British Eurospy 60's movie stars three of the coolest actors EVER ! : Monica Vitti as 'Modesty', opposite Terence Stamp as 'Willie Garvin' and Dirk Bogarde as her nemesis 'Gabriel' - What more could you want!

Modesty Blaise is a 1966 British comic spy-fi film directed by Joseph Losey, produced by Joseph Janni, and loosely based on the popular comic strip Modesty Blaise by Peter O'Donnell, who co-wrote the original story upon which Evan Jones and Harold Pinter based their screenplay.

After the assassination of one of their agents in Amsterdam, British Secret Service chief Sir Gerald Tarrant recruits former criminal mastermind Modesty Blaise to protect a shipment of diamonds en route to Abu Tahir, the Sheikh of a small Middle Eastern kingdom.

The shipment has also attracted Gabriel, the head of a criminal organization that includes his accountant McWhirter and bodyguard Mrs. Fothergill. Modesty believes that Gabriel, who maintains a compound in the Mediterranean, is dead, but he reveals himself to her.

In exchange for an exclusive discount on the kingdom's oil exports, the British government delivers periodic diamond shipments to the Sheikh.

Blaise, who enjoys an ongoing love-hate relationship with law enforcement, is recruited not only for her competence, but because she is the Sheikh's adopted daughter and thus trusted by him implicitly.

Modesty agrees to the arrangement, on the condition that she is given total immunity by the British government and complete freedom to deliver the diamonds how she sees fit.

With Sir Gerald monitoring her from afar, Modesty travels to Amsterdam, where she reunites with her former lover Paul Hagen, a Secret Service agent and aide to Sir Gerald.

She calls upon her longtime partner, Willie Garvin, who is reuniting with an old flame, Nicole, who may have information on Gabriel through her employer, an illusionist associated with him.

Modesty narrowly survives several attempts on her life by Gabriel's assassins, whose failure leads to their swift execution by the ruthless Mrs. Fothergill. Modesty continually toys with Hagen, first seducing him before stealing his gun and disappearing.

When Gabriel learns that Nicole is working with Modesty and Willie, he orders her assassinated.

The illusionist sends thugs to have her killed, and they succeed when Modesty and Willie fail to intervene in time. Modesty and Willie set themselves up as live bait to draw Gabriel out, but find themselves pursued by Tarrant and a jilted Hagen, being briefly arrested before quickly escaping with the help of some smoke bombs.

When Modesty attempts to identify and infiltrate the boat being used by Gabriel for the planned diamond theft, she is lured into a trap and captured. Gabriel reveals his true plan, to use Modesty as leverage to force Willie to steal the diamonds for him.

Willie reluctantly agrees to the arrangement, successfully stealing the diamonds from under Tarrant and Hagen's noses.

He and Modesty are subsequently taken to Gabriel's island fortress, where they are promptly thrown into prison cells. Gabriel offers Modesty to join forces, but she refuses.

Willie and Modesty manage to escape and kill Mrs. Fothergill, and signal their location to the Sheikh's forces.

The Sheikh leads his army to the island, leading to an all-out battle with Gabriel's forces and ending in his capture and the diamonds reaching their intended owner.

In his desert camp, the Sheikh leaves Gabriel tied up outside to dehydrate.

McWhirter suddenly appears in Highland dress to free his employer, though no one seems to notice or care.

When the Sheikh asks Modesty what he can do for her, she asks for the diamonds.

He responds by laughing boisterously and she seems to go along with it, but suddenly breaks the fourth wall by looking directly at the camera as the film ends in a freeze-frame shot.